Hidden Rubles in a Hollow Brick 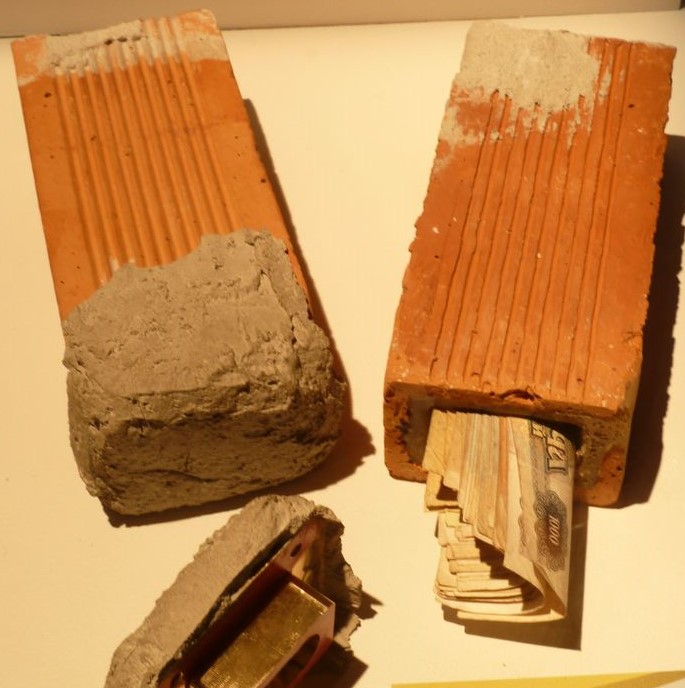 Disguised objects for use as dead drop containers required an incredible amount of research, experimentation, and testing before they could be used for high-risk operations in the field. The slightest imperfection could result in the arrest and expulsion of a CIA case officer, and the imprisonment, torture, and even execution of a spy working at their behest in a foreign country.

Containers of almost every size and shape imaginable have been used over the years and range from banal items such as a hollow hairbrush, to the fiendishly creative, such as a preserved dead rat covered in hot sauce to prevent stray cats from carrying it away from its intended location.

In 1967, based on the request of a case officer in Moscow, the CIA’s Technical Services Division began working on designing this hollow brick for passing money to a Soviet agent. Case officers at Moscow Station surreptitiously gathered brick and mortar fragments from construction sites. This operational act would be highly unusual, and considering they were all under constant surveillance when leaving the embassy, had to be accomplished with great care.

Meanwhile, other case officers in Switzerland worked to find a source of well used, small-denomination Soviet rubles. These were also passed to the Technical Services Division, who then worked to compact the rubles in such a way to fit the largest amount of currency into the smallest space possible. What they came up with was a shrink-wrapped packet of rubles so dense and tightly wound that it felt like a stone to the touch.

The first prototype of the brick looked perfect in color, texture, and size. But it was mostly made of Styrofoam. When the fake construction brick was picked up it was immediately apparent it was not real. A few years earlier, the Soviet spy Rudolf Abel operating in New York City had been undone when a newsboy found a surprisingly light nickel in his pocket change and realized it was hollow and contained a coded note inside. The smallest error could potentially unravel an operation comprised of years of careful planning and effort. The CIA needed this brick to be absolutely perfect in all ways, so the engineers at TSD went back to the drawing board once again.

Months later the improved dead drop brick was sent to Moscow and put into field use. It was left near a radio transmission tower in a pile with other bricks, and a Soviet scientist being run as a source by Moscow Station was sent to pick up his payment. He searched around but never located the dead drop and reported that it had not been correctly placed.

His handler sent him back to the site a second time with assurances that the ‘normal’ brick he had discarded really was a dead drop. This was the level of quality control that TSD had been striving for. Using this method, Moscow Station was able to pass millions of rubles to its agents in the coming years.

This particular brick eventually made its way into the private collection of Keith Melton, a renowned collector of espionage paraphernalia, and is now on display at the International Spy Museum in Washington, DC. You can read more about this hollow brick and many of TSD’s other incredible accomplishments in Robert Wallace and Keith Melton’s book Spycraft: The Secret History of the CIA’s Spytechs, from Communism to al-Qaeda.

If you want some Soviet rubles of your own, you can pick up a set of rubles that were once on display at the now-closed KGB Spy Museum in New York City from the Spycraft 101 store.