Face Off – A CIA Disguise in Action 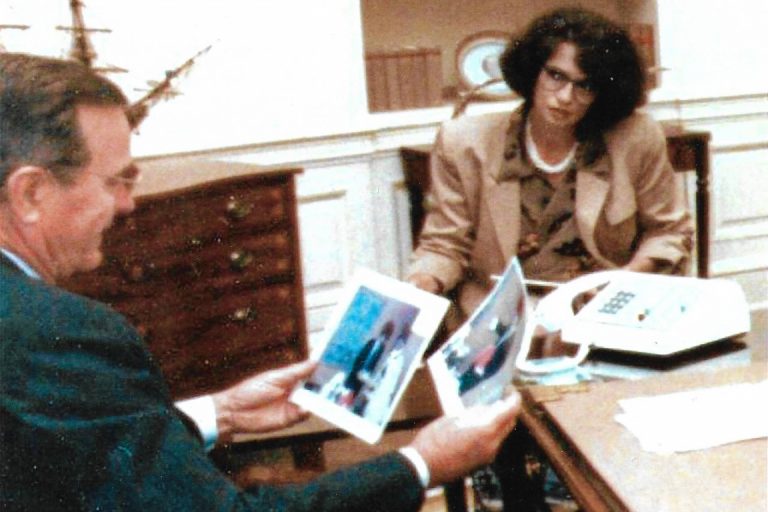 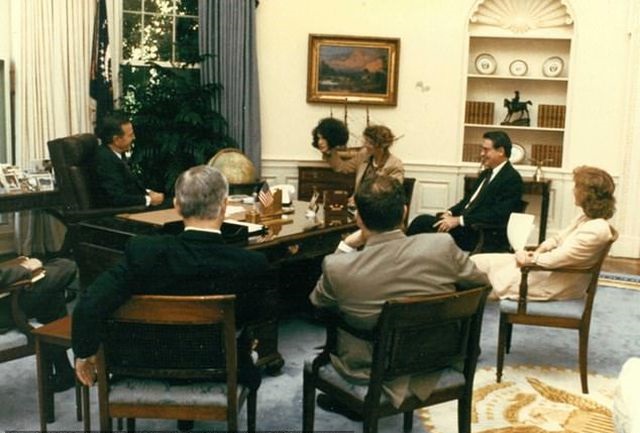 CIA disguise artist Jonna Mendez removes an elaborate mask and wig, revealing her true identity to President George H. W. Bush in the Oval Office in the early 1990s. The moment was captured for history by a White House photographer.

President Bush was a former director of the CIA himself and was still stunned by her instant transformation. After receiving a briefing from Jonna on cutting-edge disguise techniques, she told him she was wearing one at the moment. Even after looking closely and walking in a complete circle around her, President Bush was unable to spot any telltales that she wasn’t who she appeared. Only when she removed the complete mask and wig was her true self revealed.

The mask was part of a still-classified program known as DAGGER. Consisting of an ultra-realistic, full-face mask and wig, the wearer could don it in just a few moments, completely changing their appearance to escape from any known or potential surveillance teams following them. CIA case officers using DAGGER could change not just their appearance, but their race and even gender as well. Jonna preferred to disguise herself as an African-American woman when working operationally. In fact, she nearly attended the briefing at the White House in the guise of an African-American man. The main difficulty with this approach was that her voice would almost immediately give away the lie of her appearance.

Jonna reported that on some occasions the CIA even disguised two different case officers as identical twins. When one was tailed by an adversarial surveillance team, they could be replaced by their twin at a predetermined rendezvous point, and the original could change out of the disguise (or into a new one) and continue with the mission, now free of any observers.

Originally hired by the Central Intelligence Agency as a secretary in the 1960s, Jonna eventually retired in 1993 as the Chief of Disguise for the Office of Technical Services. This was the culmination of an incredible career that had taken her to some of the world’s most dangerous locales in the performance of some of the riskiest espionage activities imaginable. She worked in Moscow, USSR, Havana, Cuba and elsewhere during the height of the Cold War. During interviews after her retirement, Jonna reported that on two separate occasions she had conducted meetings on the Indian subcontinent and in Bogota, Colombia, where she had been unsure if she’d leave the meeting alive.

While employed by the CIA she met her future husband, Antonio “Tony” Mendez, a painter who worked his way up to become the CIA’s top forger and disguise artist. Tony was played by Ben Affleck in the hit film “Argo”, about the rescue of American hostages in Iran in 1979. Together, Tony and Jonna made a powerful team inside the CIA, doing the kind of work most Americans might relate to the popular Mission: Impossible film franchise. Tony later wrote an autobiography called Master of Disguise, and Jonna authored the book The Moscow Rules. The couple also cowrote Spy Dust: Two Masters of Disguise Reveal the Tools that Helped Win the Cold War.

With nearly three decades of advances since DAGGER was used operationally, it is hard to imagine how far disguises have come since this near-perfect moment. In 2015, Russian media released a news report including surveillance footage from a Moscow cafe in which they claimed a young, white male CIA case officer had entered the cafe disguised as a black woman, walked into the bathroom, and exited a few minutes later now disguised as a much older white man. That video is available on the Spycraft 101 YouTube channel.

Some of Jonna’s original disguise items are on display at the International Spy Museum in Washington DC, where she is currently a member of the board of directors.