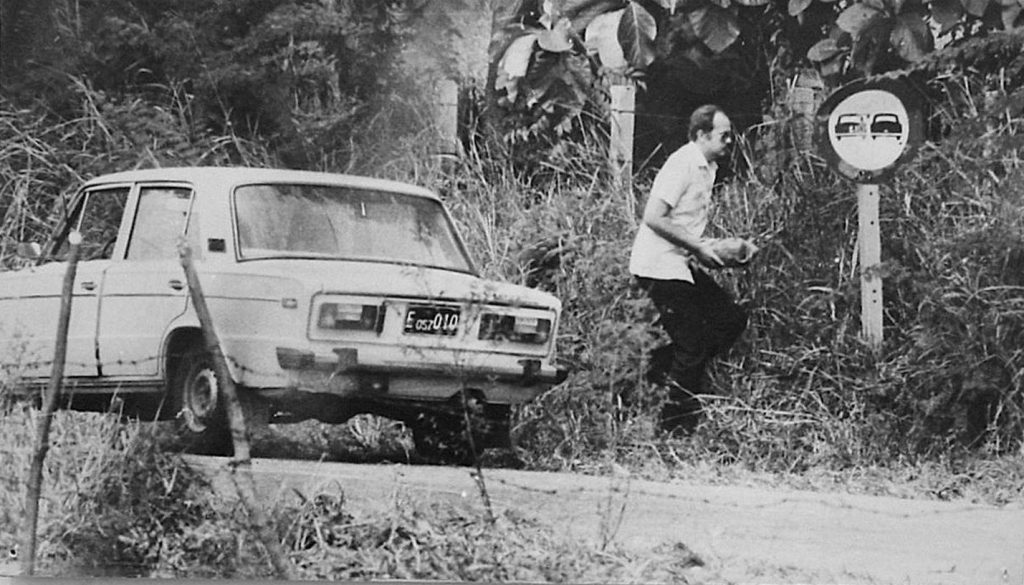 Cuban counterintelligence photographed a suspected CIA case officer planting a dead drop outside of Havana. Fidel Castro’s Intelligence Directorate grew quickly in size and capability following the Cuban revolution. By the 1980s they were a force to be reckoned with, and the CIA experienced great difficulty in conducting operations on the island. From the very beginning of Castro’s revolutionary government, Cuban intelligence agents infiltrated anti-communist groups and intercepted infiltrators from Miami, as well as many of the illicit shipments of arms and equipment that were smuggled to Cuba, both by the CIA and by groups of anti-Castro Cuban exiles in South Florida.

Photographed here is Richard Brennan, ostensibly a secretary in the politicaleconomic department of the US Interests Section, as he places a package in the tall grass next to a road sign. According to the Cubans, Brennan made more than a dozen dead drops of this type between 1982 and 1984. This package contained 25,000 Cuban pesos, one-time pads for encrypted communication, an RS-804 covert communications device, and other highly incriminating items.

Brennan was accompanied by his wife Virginia on these runs. At first glance it may seem incredible that a CIA case officer would involve their spouse in high-risk espionage activities, but this has been a common practice for decades in many overseas locations. Throughout the Cold War and beyond, spouses of CIA case officers would receive training in tradecraft as well before being posted to an especially difficult or dangerous overseas assignment. This allowed them to not only understand, observe, and mitigate the risks they faced as a foreigner in a potential hostile country, but also to accompany their spouse on sensitive assignments. For example, a family taking a weekend trip is excellent cover for action as it is inherently less suspicious than a lone suspected case officer driving through the city.

Due to the cessation of formal relations between the United States and Cuba, the US embassy in Havana was closed for many years beginning in 1960. US government personnel (including the CIA station) worked out of a US Interests Section in the Swiss embassy instead. Cuban government personnel in the United States worked out of a Cuban Interests Section in the Swiss embassy in Washington DC as well.

In June 1987, Cuban agent Florentino Aspillaga defected to the United States, and claimed that at least 27 CIA-run agents inside Cuba had been doubled back on them. That would explain how the Intelligence Directorate was in position to photograph the Brenan’s making this dead drop. As a response to Aspillaga’s defection, Cuban state television released a documentary the following month with footage of American diplomats on the island engaged in suspicious behavior similar to Brennan’s dead drop from three years earlier.

The documentary also named four of the thirteen American diplomats as suspected CIA case officers, and claimed that since 1977, 38 out of the 69 personnel assigned to the US Interests section in Havana had actually been working for the CIA. Although Cuban state-sponsored television is rife with propaganda, there can be no doubt that the CIA had a heavy interest in and involvement with Cuban affairs on the island dating back to the 1950s.