A James Bond film wouldn’t be complete without a flashy sports car loaded with hidden weapons and gadgets. Although the real world of spycraft features very few high-speed car chases, there’s no question that espionage occasionally requires unique forms of transportation. Whether flying through the skies, traveling over land, or silently running under the water’s surface, the world’s intelligence agencies have developed some incredible vehicles over the past seventy years. Here are seven amazing spy vehicles to rival 007’s rides.

The Welbike was designed by the British Special Operations Executive’s Station IX, also known as the Inter Services Research Bureau, and intended to be airdropped to SOE agents behind enemy lines for use in escape and evasion operations. It was small enough to fit inside a standard parachute drop container – 51″ long, 15″ high, and 12″ wide.

The handlebars and seat were collapsible, and all other parts including the gas tank and wheels were designed as small as possible. It had no suspension, no lights, and only a single brake on the rear wheel. The one-gallon fuel tank gave it a range of 90 miles. It was designed to be ready to ride just eleven seconds after opening the container.

More than 3,500 Welbikes were produced during the war. Several of the Welbikes were also used as bribes to Chinese officials during Operation Remorse in 1943-1944, which was aimed at maintaining the economic independence of Hong Kong during the Japanese occupation of China.

Infrared camera flashes hidden in the door of an East German Trabant. The Stasi secret police commissioned the Zeiss optics company to produce a revolutionary vehicle-mounted camera system for surveillance operations. The car door’s outer metal panel was removed and replaced with a plexiglass shield painted to blend in perfectly with the rest of the car. Twelve large infrared flashes and a camera system were mounted in the door frame. The camera was equipped with a cutting-edge laser rangefinder and autofocus capability. The laser rangefinder sent an audio signal to an earpiece-equipped surveillance operative inside the car when a person passed in front of the camera. The operative could then trigger the camera to capture photos in complete darkness with no visible flash to alert the target.

The system cost 215,000 Marks at the time, and the Stasi purchased 25 of them. In their efforts to keep nearly all East Germany under constant surveillance, no price was too high to pay. This system is now on display at the Stasi Museum in Berlin, Germany. The museum is inside the former Stasi headquarters which was overrun by the citizenry when the Berlin Wall fell in 1989. Fortunately, they preserved much of the technology discovered within for future generations to learn about.

The KGB’s dreaded black Volgas were feared by Russian drivers and American CIA case officers alike. The GAZ 24-24 was a special model manufactured as a security escort or pursuit vehicle. One hundred cars per year were manufactured, and the vast majority went straight to the KGB. A rare few went to high-ranking party officials. The cars were described by one former KGB driver as terrible in turns but incredibly fast and powerful on the straightaways.

The KGB’s Volgas had a few modifications intended to lower its profile out on the street. The cars had automatic transmissions but used a standard gear-shifter to blend in. They were also fitted with a fake clutch pedal on the floor. The 24-24 variant had a 195HP V8 engine with a top speed of 105mph, which allowed it to easily outclass virtually any other car on the road at that time. Those few citizens who could afford a car often had 50hp or fewer to call on. The Volgas also had upgraded shocks, springs, and brakes. Ballast weight was added in the trunk compartment to offset the increased weight of the V8 engine over the standard four-cylinder. 24-24s rode lower on the springs due to the heavier load, and had a dual exhaust system which merged to a single pipe at the rear of the vehicle to further lower its profile.

CIA case officers at Moscow Station were trained extensively in countersurveillance. The black Volgas were easily recognized due to their rarity. But when the KGB used other, more common models for surveillance, there were a couple of indicators to look for. The KGB had access to power washing equipment, and often kept their vehicles significantly cleaner and shinier than the average Muscovite. KGB cars were also equipped with windshield wipers, a luxury item in the USSR at that time. Wipers were so valued that they were often stolen from parked cars; something no one would dare try with the KGB.

The Special Operations Executive’s “Sleeping Beauty” motorized submersible canoe (or MSC), designed for sabotage and recon missions in enemy harbors during WWII. The submersible canoe could transport a single frogman deep into an enemy harbor to attach limpet mines to enemy ships. The pilot navigated by briefly surfacing just long enough to get his bearings, then submerging again to continue on the correct path.

It was used by a special operations unit known as Z Force, staffed by commandos and sailors from the Australian, New Zealand, and British armed forces. In 1943 an incredibly successful mission known as Operation Jaywick succeeded in sinking or heavily damaging seven Japanese ships in port in Singapore Harbor. Just six men infiltrated the harbor in kayaks and canoes and made it out with zero casualties.

The MSCs were intended for exactly this type of operation. In August 1944, another near-identical mission was planned, called Operation Rimau. Fifteen MSCs along with four other folding assault boats were transported to the area on the British mine-laying submarine Porpoise, then transferred to a small junk called the Mustika. There the 24 men picked for the operation departed for Singapore Harbor.

Unfortunately, disaster struck just one hour before they were scheduled to depart the Mustika for their underwater run into Singapore Harbor. A local patrol boat approached the Mustika closely enough that the Z Force commandos were forced to open fire. Most of the patrol boat crew was killed but at least one survived to call in the incident. The Mustika and the MSCs were scuttled with explosives as they were still top-secret at the time. The men were all eventually killed in battle with Japanese forces or captured and executed.

The MSCs were far from perfect but were an important starting point for future swimmer delivery vehicles by special operations forces.

3 “The Quiet One” – Central Intelligence Agency

The CIA’s original silent helicopter flew into North Vietnam in 1972. Beginning in 1968 the CIA sought a long-range, nearly silent helicopter for covert infiltration and exfiltration. The result was a heavily modified Hughes 500P (P for Penetrator) known as “The Quiet One”. By adding one additional main rotor blade and two more tail rotor blades, rotor noise was substantially mitigated. An enormous muffler below the tail and numerous other small internal modifications further reduced the sound generated during flight. A next-generation FLIR camera was installed that was significantly more advanced than anything else available to the US military at the time. When the modified helicopter was demonstrated for CIA director Richard Helms in 1971, he was unable to hear the aircraft as it passed 500 feet overhead, even knowing it was coming.

Two such helicopters were completed for one special mission; a covert penetration of North Vietnam to tap a phone line used by NVA high command. With the Paris peace talks beginning, the phone tap would allow US diplomats to gain the upper hand in peace negotiations.

The mission went ahead on December 5th, 1972. The Quiet One, piloted by two volunteers from Air America, dropped two highly trained Laotian commandos into the mountains, next to the carefully selected telephone pole away from known NVA patrol routes. The commandos scrambled up the concrete pole and emplaced the bugging equipment, while the pilots moved a distance away to drop a spider relay. The solar-powered relay was similar to a spider’s web that caught in the high branches of a tree, nearly invisible from the ground.

The plan worked perfectly. The infiltration went undetected, and the wiretap provided valuable intelligence for the next several months, giving Henry Kissinger’s State Department an advantage in the peace talks. The helicopter was quietly exfiltrated out of Laos with no one the wiser.

A real all-American Cold War spymobile. Soldiers of the US Military Liaison Mission based in Potsdam during the Cold War played a deadly game of cat-and-mouse with the Soviet KGB and East German Stasi for more than 40 years. They pushed the limits of international accords to openly spy on each other, using overpowered American muscle cars to easily evade the enemy agents surveilling them. Every vehicle was customized by the Army’s Berlin Brigade Quartermasters, including this 1967 Ford Fairlane, equipped with a 390 cubic inch V8.

In a typical retrofit, the springs were replaced with heavy duty ambulance springs, Koni shock absorbers were installed, and a 44-gallon fuel tank replaced the original. Quarter-inch steel plates were welded to the undercarriage and German-style tow hooks welded to the bumpers. Halogen headlights replaced the stock sealed beams. The electrical switches were modified to permit the horn, headlights, parking lights, turn signal, and taillights to be turned off individually or all at once. Michelin all-terrain radial tires replaced factory street tires. The whole vehicle was then painted olive drab. Over the course of 40 years, many different vehicle models were utilized, including Ford Galaxie police interceptors, Ford Broncos, Jeep Wagoneers, and Mercedes G-wagens.

A vehicle like this could easily outrun the East German Trabants arrayed against it, and then cut down tank trails in the hills and valleys of Soviet training cantonments. MLM members stocked the vehicles with food, water, camping gear, and surveillance equipment for multi-day missions, never knowing how long it would take them to get back home from a tour.

In May 1958, CIA pilot Allen Pope was shot down and captured during a covert bombing raid against the Indonesian Navy while flying a Douglas B-26 Invader during the Indonesian Crisis. After learning that Pope was being held on house arrest at a jungle resort, and had some freedom of movement outside, the CIA’s Technical Services Staff came up with a plan to air-drop an inflatable airplane to him, so he could rescue himself. Working with the Goodyear Tire and Rubber Company, they developed a packable aircraft filled with chemical pellets inside. When Pope reached the aircraft, all he would need to do was pour water into the reservoir, which would react with the chemical pellets, quickly filling the rubber fuselage with an inert gas. Pope could then fly himself to safety.

The prototype was tested but the rescue operation was ultimately canceled for unknown reasons. Pope remained under house arrest until 1962, when two paramilitary CIA officers were inserted nearby via submarine, made contact with him, and assisted him in escaping through the jungle to safety. Pope returned to service with the CIA afterwards as a pilot on covert missions.

Years later when another mission offered the potential of using the inflatable airplane, CIA technicians pulled it from the warehouse only to discover that the rubber was dried up and cracked due to lack of maintenance. The prototype was discarded, never to be used again.

The true story of the Inflatable Airplane and the rescue of Allen Pope is covered in “Spycraft”, one of my all-time favorite espionage books. 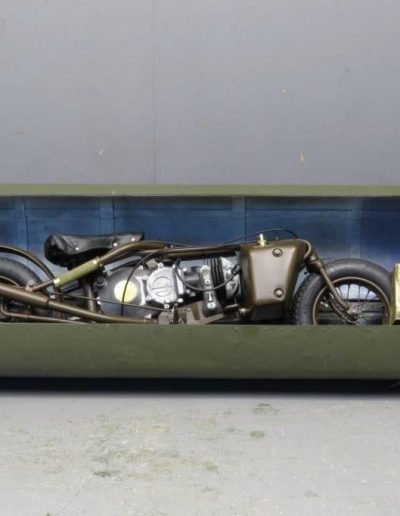 Welbike ready to be air-dropped into the field. 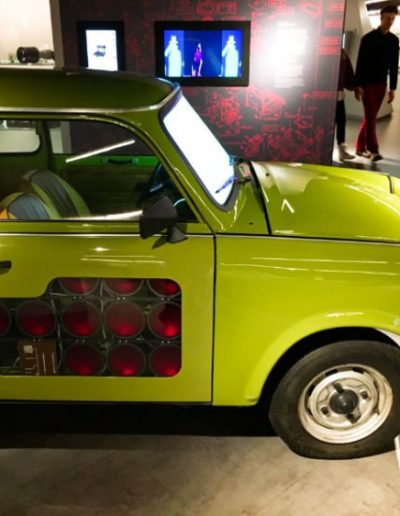 A Stasi Trabant on display, with a cutaway panel revealing the infrared flashes hidden in the door. 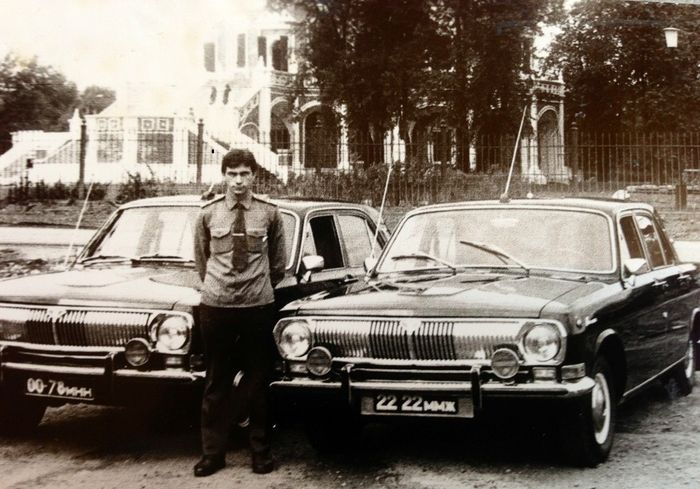 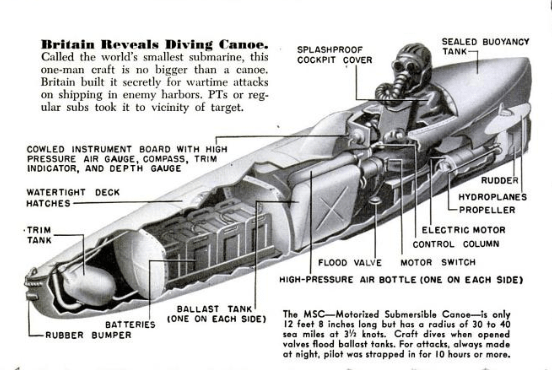 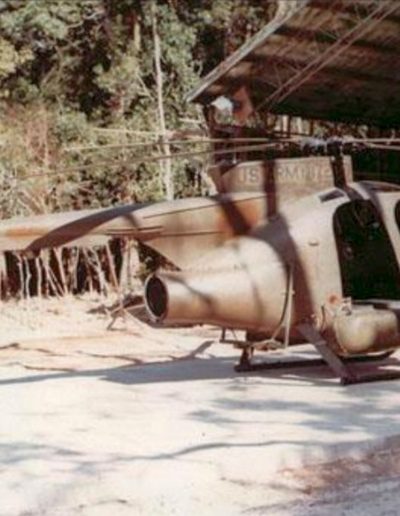 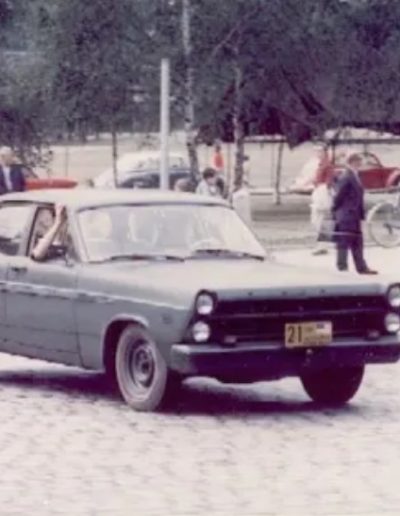 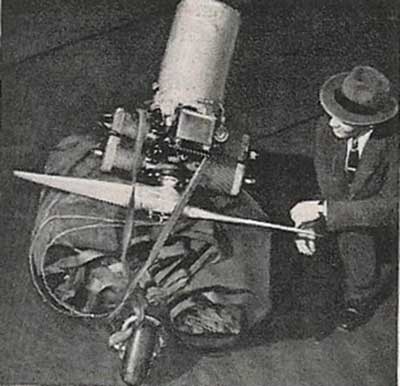 The inflatable airplane, designed and built with the help of the Goodyear Tire Company.