THE MURDER OF ALEXANDER LITVINENKO

Despite the end of the Cold War and the collapse of the Soviet Union, the current Russian government still uses insidious methods to threaten, silence, disfigure, and kill its opposition worldwide, especially Russian expatriates and dissidents. Dozens have died by poison or radiation, and there may even be hundreds more who were killed but whose deaths appeared to be of natural causes.

Arguably the most famous Russian assassination-by-poisoning occurred on November 1st, 2006, when Alexander Litvinenko, a former member of the Russian Federal Security Service (FSB) suddenly fell ill after a meeting in London with some of his old comrades.

Litvinenko had joined the Russian Ministry of Internal Affairs in 1985, and served primarily in KGB counterintelligence until 1991, when the Soviet Union collapsed. Afterwards he became a member of the new FSB and served during the First Chechen War, running a network of agents in Chechnya in 1994 and 1995. By the late 1990s he had risen to the position of Senior Operational Officer in the Directorate of Analysis and Suppression of Criminal Groups within the FSB. In this position, Litvinenko realized that the entire system was corrupt from top to bottom. His job was to suppress criminal groups, but his own supervisors in the FSB were actively participating in protection schemes and attempting to squeeze these same criminal groups out of the market so they could get rich themselves.

Along with several other FSB officers, Litvinenko spoke out against the FSB and Vladimir Putin at a press conference with the Russian news organization Interfax. He was fired from the FSB and ordered not to leave Moscow. After waiting in limbo for more than a year, Litvinenko fled Russia in 2000 along with his family. They purchased flight tickets which included a layover at Heathrow Airport near London. While there, Litvinenko requested asylum for his family. They were able to remain in London and the asylum request was granted on humanitarian grounds. Once he was settled in London, he began working as a source for British intelligence. He was soon being paid 2,000 British Pounds monthly, and regularly meeting with a handler known as “Martin”.

Between 2000 and 2006 Litvinenko authored two books which were highly critical exposes of Putin and the FSB. In “The Gang from Lubyanka”, Litvinenko alleged that the FSB had descended from a professional intelligence organization into an organized criminal enterprise. In “Blowing Up Russia”, which he co-authored with Yuri Felshtinsky, Litvinenko claimed that the infamous Russian Apartment Bombings of September 1999 were in fact a false flag operation by the FSB, intended to initiate the Second Chechen War and aid Vladimir Putin in his rise to power.

Litvinenko also made numerous explosive allegations in television and print interviews regarding other incidents which he claimed were initiated by the FSB. These included the 1999 Armenian parliament shooting which claimed the life of the Armenian Prime Minister and seven others; the Moscow theater hostage crisis which resulted in at least 170 deaths, and others. Publishing books and participating in interviews made Litvinenko a clear target for Putin’s ire. These kinds of public accusations would have put Litvinenko high on the target list for the FSB, and consequently the Chamber as well.

Litvinenko’s face became well-known throughout Russia due to his high public profile. A Russian armed forces promotional film produced in 2003 showed Russian soldiers firing their rifles at a paper target with Litvinenko’s face on it. The soldiers were from the Russian Ministry of Internal Affairs 1st Special Purposes Troop, known as the Vityaz. The targets were in use from at least 2003 until 2007, well after Litvinenko’s death.

On the evening of November 1st, 2006, he had dinner at the Millennium Hotel with two former FSB colleagues, Dmitry Kovtun and Andrei Lugovoi. Lugovoi was on his third trip from Moscow to London in as many weeks arriving on October 31st. This time he had brought his entire family with him. His operational cover was that the family was watching the CSKA Moscow football club play Arsenal in the Champions League the following evening. While in town for the football match, he called Litvinenko to see if he wanted to meet up to talk. Litvinenko agreed and arrived at the Millennium Hotel a few hours after.

The waiter who served them later reported that after he delivered the pot of tea to the table, the two men made an attempt to block his view of what happened next. Later, after they left the restaurant, the waiter poured the remaining tea out into the sink and noticed it was noticeably darker and thicker than before. He believed the men had sprayed a chemical substance into the tea after he delivered it to the table.

Just a few short days after his fateful dinner with Kovtun and Lugovoi, Litvinenko’s hair fell out. He passed away approximately three weeks later in a London hospital. He was cognizant until nearly the end and gave an interview clearly stating he believed he had been poisoned by Russian agents on the orders of Vladimir Putin.  Doctors determined that he had ingested a radioactive substance which they had never before encountered. In some ways, the Chamber’s continuous innovation into uncharted territory was the very calling card that it sought to avoid.

After Litvinenko’s hospitalization British law enforcement and intelligence agencies quickly swung into action, alarmed by the sensational but seemingly plausible claims that he made from his hospital bed.  With the aid of the Atomic Weapons Establishment research laboratory at RAF Aldermaston, it was determined that the poisoning agent was Polonium-210, a practically undeniable indicator that this had been a state-sponsored murder.  Polonium-210 could only be produced in a military-owned nuclear reactor. There was no other reasonable method for producing or delivering it. Armed with this new information and techniques to search for traces of Polonium, British police quite literally followed a radioactive trail around London, discovering nearly 40 different Polonium-210 “hot spots” across the city. Fearing a public panic, this information was not released until much later. London’s extensive network of surveillance cameras were used to track the movement of Kovtun and Lugovoi.

The hot spots were then cross-referenced with the travel pattern of the two Russian intelligence officers and were a near perfect match. There could be no doubt that FSB agents had traveled to the London carrying the Polonium used to murder Litvinenko. Investigators determined that Kovtun and Lugovoi had likely first attempted to poison Litvinenko at a previous lunch meeting on October 16th at a London sushi bar. For unknown reasons they were unsuccessful and carried the Polonium around the city with them for two weeks until the next opportunity presented itself.

London prosecutors took the risky move of declaring this to be an official murder inquiry. While the facts couldn’t be clearer, declaring that the suspects were Russian state agents was a bold move on the international stage.

Ultimately nothing came of the inquiry as the Russian government did not cooperate, to no one’s suprise. In 2007, Andrei Lugovoi was admitted to the Russian Parliament, which provided him diplomatic immunity from any and all charges. It’s clear that he had found favor with Putin’s government.

Litvinenko’s widow Marina has continued to seek justice for her late husband in the years following his murder.  In 2007 she registered a complaint with the European Court of Human Rights, although little was done about it. An inquest held in London from 2013 through 2016 found that Litvinenko was definitely killed by Kovtun and Lugovoi, and there was a “strong probability” that they were acting on behalf of the Russian government.  The British government requested extradition of the two men from Russia but of course the request was not granted.

While Litvinenko’s death remains a technically unsolved mystery, there can be no doubt as to who was behind it all. The problem, as always, is holding a man as powerful as Vladimir Putin responsible in a meaningful and tangible way. International sanctions have had little effect thus far in curbing Putin’s use of the Chamber. His political enemies are more aware of that than anyone else. 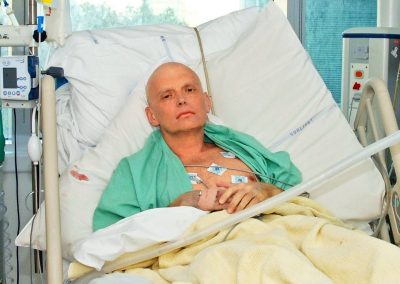 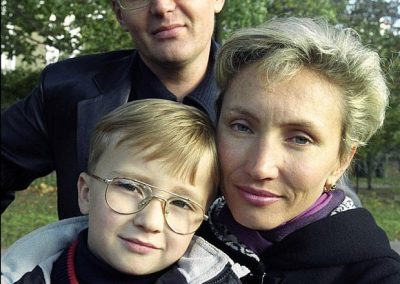 The Litvinenko family in happier times. 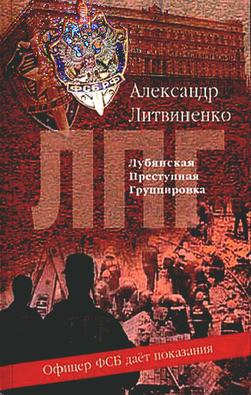 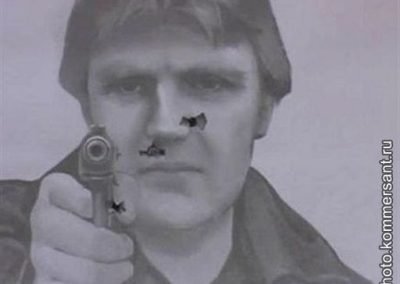 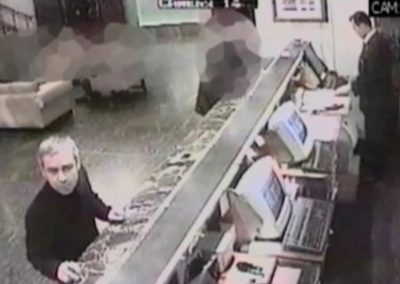 Lugovoi arrives at the Millennium Hotel for his fateful dinner with Litvinenko. 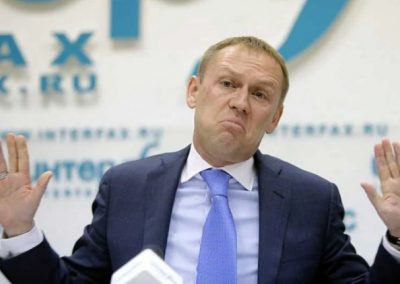